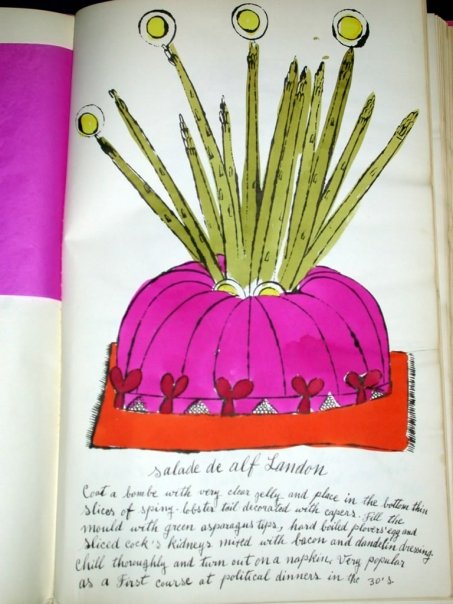 My uncle, Loy Hanna, met Andy Warhol in the 1960’s and received a copy of Wild Raspberries from Warhol, himself.

“Wild Raspberries,” according to Frankfurt:

Lunching and shopping became a ritual. During one of their excursions, Mrs. Frankfurt told the artist, “We had to write a funny cookbook for people who don’t cook. My mother, who was a hostess sine qua non, deemed the most important thing for a new bride was to be a good hostess. I wanted to emulate my mother, of course, and it was the year all these French cookbooks came out. I tried to make sense of them. ‘Make a béchamel sauce,’ they’d say. I didn’t even know what that was.

“So we did the book, Andy with his Dr. Martin’s dyes and Mrs. Warhol [Andy’s mother], her calligraphy. She was gifted and untutored, and we left all the spelling mistakes. I wrote the recipes.” Schoolboys were hired to hand-color the books, a wonderful shiny paper was selected for the covers, and the books were brought to rabbis on the Lower East Side for binding. “There were two versions, colored” of which there were 34, “and semicolored. We thought it would be a masterpiece and we’d sell thousands. I think we sold 20.”

How to Advance your Career in 2021

Why You Need to Hire an Organizational Development Consultant

5 Unique Perks You Can Offer Your Employees

5 Ways to Elevate Any Look

Self-Advocacy Tips for Your Job Search