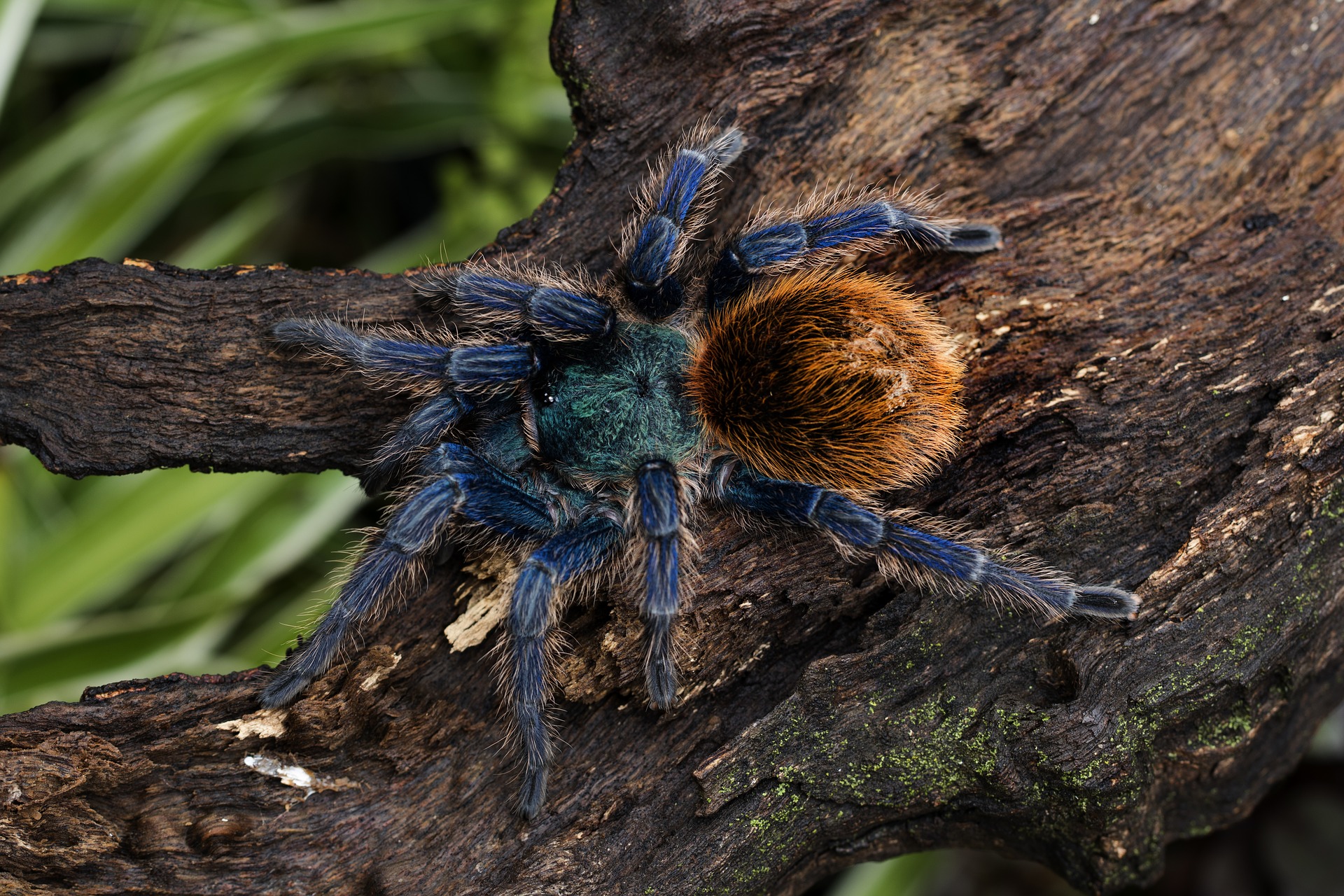 Cobalt blue tarantula, one of the rarest phenomenal creatures, has a stunning metallic blue color, as suggested by its name, and astonishing appearance.”

The cobalt blue tarantula, which belongs to the Theraphosidae family of spiders and is originally known as Haplopelma lividum, is one of the rarest and most beautiful among the 800 (approximately) tarantula species that exist in the whole world. This tarantula species is native to the tropical Southeast Asian rainforests of Vietnam, Thailand, Myanmar, Malaysia, Cambodia, Laos, and Singapore.

Like every other creature on this planet, the cobalt blue tarantula has distinct characteristics that differentiate it from other living beings.

Read on to know some basic facts about this beautiful but feisty creature.

Although the Cobalt Blue Tarantula seems brown or black at first glance, its true color becomes stunningly apparent in proper lighting or upon better and close inspection. Its legs are metallic iridescent blue, cephalothorax is greenish-blue or gray, and the mouthparts under the fangs are bright red. Sometimes yellowish fuzz-like hair covers the carapace and abdomen. Subtle differences are seen in different cobalt blue tarantula. While some can have black upper legs and a neon yellow band circling the carapace, many possess stripes on the abdomen that are radiant white. Some can even have white splashes on the leg joints, highlighted with bright yellow color. Other variations include some tan shades and beige colors on the abdomen and cephalothorax.

The male and female cobalt blue tarantulas look alike until the final molting of the male ones. The baby spiders of this species are light blue.

Although adult spiders are generally 13-14 cm or 5-6 inches in length, they can grow up to 9 inches in the wild. While females have a body length of 5.3 – 8.5 cm or 2.0 – 3.3 inches, all males are half of this size. Baby spiderlings are very tiny, only 1 cm in length. But they grow very fast and become 1 inch or 2.54 cm only in the first year alone. Males are extremely fast-growing and often get matured in the first year.

The process through which tarantulas change and regenerate their exoskeleton and renew the missing limbs is called molting. Like most other tarantula species, the cobalt blue tarantula molts once or twice each year. The molting process is very exhausting as it drains a lot of energy. After molting, the tarantulas need a few days to recover completely.

Female cobalt blue tarantulas live much longer than males. Males typically have 5-6 years of a lifetime, while the females’ lifespan is 15-18 years. In the wild, female tarantulas can live up to 30 years.

Cobalt blue tarantula species have very aggressive, feisty, and defensive personalities. Even young spiderlings show hostile postures and fiercely attack. As they are very skittish and sensitive, they strike a threatening stance immediately whenever approached. Their bad temper and aggressive behavior make the rehousing process very difficult for the pet owner.

This species is an expert at escaping. It attacks and defends itself only by biting with its strong fangs. It does not have any urticating or stinging hairs on its abdomens like other tarantula species, making it easier for it to attack with little or almost no prior warning.

Cobalt blue tarantulas dwell in deep underground burrows in the wild. Sometimes they build the den by themselves; other times, they simply live in the used ones dug by other creatures.

This species is nocturnal. They come out and wander at night and spend their time in the burrows during the day. Females come out in search of food,  and males search for both food and females.

Though The bite of this species is very painful, it is not dangerous as its venom is considered not poisonous to harm humans. The strength and amount of their venom are only toxic for their prey.

The cobalt blue tarantula can go on for a long period without any food. Like other arachnid species, cobalt blue tarantula kills for food. It is well known as a swift-aggressive little hunter. Its main prey is other spiders, mice, different insects, and amphibians. It delivers a toxin that paralyzes the prey, then drags the meal to its burrow and feast upon it.

Though the cobalt blue tarantulas possess eight eyes, they cannot see very well.  Its auditory functions are still unknown, but many researchers assume that its auditory senses are also poor.

As its eyesight is poor, this species mainly relies on the sensory receptors of its body. The receptors located on its body hair and legs are the most refined and reliable ones.

In the third year, the blue cobalt tarantulas finally become mature enough to reproduce. Males develop an embolus, and their color changes slightly to a bronze or tan shade. They look lankier and thinner than females. They make the sperm web and start looking for a female to mate.

The female produces a silk cocoon after 8 weeks of mating. It lays her eggs on a sac-like thing kept in her dwelling. It can produce 100 to 1000 eggs in each mating.

Despite its aggressive and hostile nature, many arachnids lovers keep and adore this little feisty. Though many will not ever think of spiders as creatures to pet, some like to look after and enjoy this tarantula’s thrilling beauty as it is not very dangerous.

Previous post How to Effectively Market Your Business Online in 2021

Benefits of CBD Treats For Your Dog

Cremation vs. Burial: Choosing The Right Option For Your Pet

4 Reasons Why Your Dog is Anxious