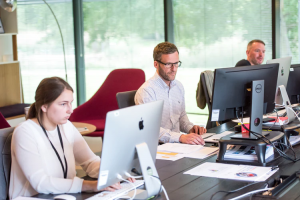 As the owner of a company, you know full-well that your overall performance is down to those working under you. If they’re pulling out all the stops and doing a great job, then you’re going to be in a much better position overall. If they aren’t exactly pulling their weight, then it’s going to have a detrimental effect on your productivity.

In order to keep your employees working away, you need to stimulate their brain somehow. They’re only human, so they’ll eventually slow down a little. It doesn’t matter whether it’s an office, a warehouse, or an outdoor environment; the people will need freshness. Doing this might sound like a pretty difficult and tedious task, but it’s actually pretty simple. Here are a few ways you can keep your employees on their toes:

This is a staple of any functioning workplace, but it’s still avoided in a lot of places. You need to be able to assess your employees individually and go through a few things with them. That one-to-one time can be pretty valuable to their work and to your business as a whole. Not only will you be able to attack certain areas and weaknesses, but you’ll be able to give them a little boost, too. Frequent appraisals might also be a good idea because each staff member will know it’s coming and put in a little extra percentage of effort.

If they know someone else is being brought in, then they’ll probably up their game a little. People tend to get motivated when they see stiff competition alongside them. When you have very little to worry about, that’s when they can become complacent. If you can afford to expand a little and bring in more bodies, then you’ll not only produce more output in terms of volume, but the quality will also rise.

People also need to stimulate their brain by teaching it new things. If you don’t actively look to educate yourself, then you’ll lose a lot of that knowledge – it’ll seemingly just fall out of your brain. As the boss, you’ll need to organize training days fairly often in order to keep the staff sharp. Training also gives you an idea of where certain staff members are in their development. You’ll want to know who can tag lifting equipment or who can operate certain software properly – if they struggle, then training will be absolutely necessary.

If you make challenges for the team, then they’ll have something to work towards. When they have very little to look forward to, it’s then easy for them to slack off a little – even if they don’t mean to. Goal-setting is smart because it’ll make them want to get that feeling of success and achievement. Because it’s a pretty addictive feeling, they’ll want it again and again. Be sure to make the goals actually achievable – if they’re too difficult, the apathy will, again, creep back into play.

Next post Looking After Your Number One Asset: Your Team

The Benefits of Working With a Staffing Agency

How To Ensure A Productive Company Labor Force

Things to Consider When Scaling Your Business

Tips for Keeping Your Employees Healthy During the Winter Months